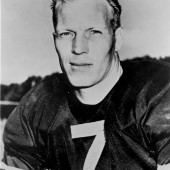 Ed Sprinkle Sprinkle played one-year of six-man football at Tuscola before going to Hardin-Simmons.  He played three seasons at HSU before the school dropped sports because of World War II.  Sprinkle joined the Navy and received an appointment to the Naval Academy, where he played football in 1943.  After the war, he signed with the […]