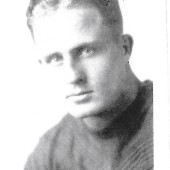 Gene Alford from Rising Star was quarterback/halfback at Daniel Baker in Brownwood and then transferred to Texas Tech and later to Sul Ross State. Pete Shotwell, then at Sul Ross, called Alford the best player he ever coached. He scored the first touchdown in Texas Tech history. He also starred in track and baseball in college. […]