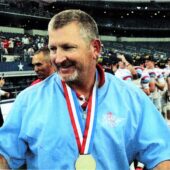 TREY RICHEY is the only person to win a six-man football state championship as both a player and a coach. He was the star running back and safety at Jayton HS where the Jaybirds went undefeated and won back-to-back state six-man football championships in 1984 and 1985. In the 1985 title game, Richey rushed for a […]